“The Fragments Of Wonder” moves in the musical sphere between Stratovarius and Beast In Black, spiced with a progressive touch. The production is powerful and guitar-heavy – an important feat because apart from catchy melodies and choruses, the guitar work is one of the outstanding trademarks and makes this album a real gem of the genre.

Katsionis produced and mixed the album in his Sound Symmetry Studio in Athens. All musicians traveled from Sardinia to Greece especially for this purpose. “The Fragments Of Wonder” tends musically into the Power Melodic Metal corner without leaving out style-defining progressive elements – a bit comparable to early Stratovarius.

SANDSTONE is one of Ireland’s most persistent and most prolific metal bands and also played as the tour backing band of ex-Judas Priest fronter Tim ‘Ripper’ Owens. They are now back with their fifth studio album “Epsilon Sky”. Darker, heavier, more sophisticated and detached from all current trends, they present an album that is completely oriented towards the preferences of the musicians involved.

The band, founded in 2003 by guitarist Stevie McLaughlin and singer Sean McBay, can look back on four weighty albums so far, with their second album “Purging The Past” from 2009 even sparking the interest of Iron Maiden vocalist Bruce Dickinson and he considered this with the statement, “this is the most impressive album to come from Ireland in many years”.

The band describes “Epsilon Sky” as an album for fans of deep, thoughtful songs in a compact‚ all killers no fillers‘ package, with the supporting elements of Metal, Hard Rock, and progressive tendencies unite perfectly.

“Epsilon Sky” is a firework of strong songs that can’t really be assigned to one genre, thus appealing to different target groups.

“Pretender” is the second song written by the band, a song full of pathos and emotions that involves the listener from the first to the last musical note. Its melodic and sometimes melancholic beginning evolves into a musical explosion when it comes to the refrain, giving way to a second part of an extremely Power Metalesque song with melodic traits, where the rhythm section and the vocalist are up and running strong.

We are pleased to present SANDSTONE’s second single from upcoming album “Epsilon Sky”, to be released on November 5th.

This mid-tempo rocker is called “Cuts To You” and features heartfelt and melodic vocals and lead guitar throughout.

Singer Sean describes it like this:
“Cuts To You is the story of a man walking against the tide, trying to find peace and harmony in his life, even willing to go against his own moral code to achieve it. A dilemma of the soul.” 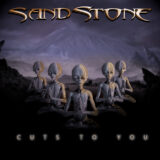 “Pretender” is the name of WONDERS’ second single, which will be released on Friday the 15th. The album “The Fragments Of Wonder” is already anxiously waiting for its big day on November the 12th.