MINOTAURUS and eHrlebnisfilm have teamed up once again to bring you the successor of their last effort „Erlkönig“. This time they chose the track „Cemetery“ from the last album Insolubilis and the video surely takes you back to medieval (or rather evil?) times. The video was filmed on location in the Volkskunde- und Freilichtmuseum Roscheiderhof and features famed (horror-)actor Mika Metz. 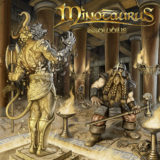