With „Far Beyond The Stars“ the Scots deliver a pure heave metal album, with stress laid on twin-barrel riffs, a beating pace and ass-kicking vocals. The five lads utterly convince fans with this, their debut full-length work, right down the line, with metal in the classical style influenced by bands such as Gamma Ray, Helloween, Hammerfall and Dragonforce.

Plus additional video „Somewhere Back In Time“: 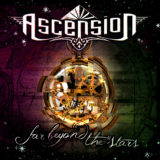