“The FIREFORCE stage is a real battlefield”, the Belgians state with pride, presenting the world with their new album ‘Annihilate The Evil’, which, like its predecessor, was also recorded under the guidance of Christian Schmid and R.D. Liapakis (Mystic Prophecy). FIREFORCE is without doubt Belgium’s biggest and internationally most active power metal band and also fans fans on the heavy metal underground scene. The album is a superb metal statement featuring an artwork by Uwe Jarling, which rounds off a strong third album.

“The Boys From Down Under” video 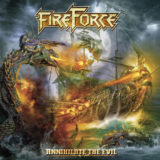 “Deathbringer” is an absolutely pure Heavy Metal album with thirteen ass-kicking songs all comprising of stunning riffs, hammering drums and rounded off with neck-breaking rhythms and with a voluminous, modern production which serves to kick the songs yet further forwards. It’s an album, which gets the adrenaline rushing, with a passion manifested in every second of the music. True- and old school metalheads will be enthralled from the first to the last, that is the true verdict. – Produced by R.D. Liapakis (Jack Starr, Suicidal Angels, Steel Prophet, Crystal Tears, etc…)