„Unum“ is a concept album, on which singer Dario Vallesi holds the sceptre as main character. He is supported in his singing role by internationally known vocalists Hansi Kürsch of BLIND GUARDIAN, Chris Bay (FREEDOM CALL), Maxi Nil (JADED STAR, ex-VISIONS OF ATLANTIS) as well as Mark Boals (MALMSTEEN, IRON MASK, RING OF FIRE), who sing the parts of other characters in the story. The songs, all highly melodic, do not sound overly polished, but the punchy sound blows your socks off. „Unum“ stands for a strong mixture of Power and Folk, marked by superfast guitars, great choruses, bagpipes and lots of small finesses, which the listener will notice and register. All this makes VEXILLUM one of the top bands of the Italian scene, with an unmistakeable style of great power metal and folk elements. 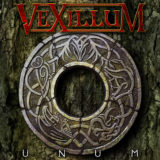