Quote: „As on our first album, we are once again thrilled to welcome a very special guest on our upcoming record, and this time it is none other than former SAVATAGE and TRANS SIBERIAN ORCHESTRA vocalist and current singer for CIRCLE II CIRCLE, Zak Stevens!
One of the most prolific and charismatic singers in the history of Metal, he has lent his voice to immortal classics such as “Edge Of Thorns”, “Handful Of Rain” and “Dead Winter Dead”, has just rocked the WACKEN OPEN AIR as part of a historical two stage performance with SAVATAGE and the TSO, and we are very honored to have Zak on board for our upcoming album “Shadowplay” (out in fall 2015), where he will contribute guest vocals to the song “The Silent Sun”.“
Here is a little teaser from the upcoming album: 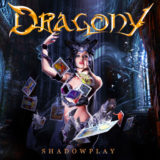