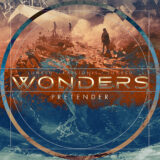 Message from the band:

„Good & Bad“ was the first song written for this album. From there we followed in the wake towards that melodic Power Metal that we have always loved, from the classics of Stratovarius and Sonata Arctica, to get to an even more modern mood like Beast In Black and Bloodbound. We are sure the fans of the genre will appreciate the speed parts, the choirs and the arrangements we have created“.

Their progressive melodic power metal album „The Fragments Of Wonder“ will be released on November 12th, 2021.