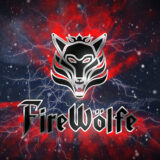 FireWölfe are unquestionably retro – but of the finer variety. Their riff monsters, refined with pithy vocals and brilliant licks and leads, breathe powerful U.S. metal vibes that should appeal to friends of legends such as Savatage or Riot as well as lovers of Heir Apparent or Fifth Angel.

The self-titled debut album, self-released by the band in 2011 and licensed to Japan, is now being released as a reissue via Limb Music.

The re-release is upgraded by a complete remastering and the brand new cover artwork by Dusan Markovic. In addition, there are two new bonus tracks recorded by the current line-up.
Guest vocalists Jonathan K. from Q5 and Bobby „Leatherlungs“ Lucas (Attacker, Overlorde, Seven Witches, Exhibition) grace these additional recordings with their well-oiled throats. The new songs originate from the original writing sessions of the two band founders Paul Kleff and Nick Layton.
Gems like „Feel The Thunder“, „Air Attack“, „Unholy“, „Back From Hell“ or the vibrating instrumental „Ice Wizard“ remain strong testimonies of a wonderfully harmonious formation that does not miss any edges.