END_OF_DOCUMENT_TOKEN_TO_BE_REPLACED

„Symphony Of War“ appears like a soundtrack for a blockbuster history movie and will attract fans of Malmsteen or Rhapsody of Fire. The sound is influenced by classical music, filigree riffing, big choirs and mighty melodies, notwithstanding first-class Metal attacks and a well-balanced heaviness. Limited double CD in deluxe slipcase includes two bonus tracks, video clip, interview with the band, wallpapers, poster & sticker!
LMPL 1010-125 Ltd. 2CD 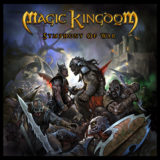